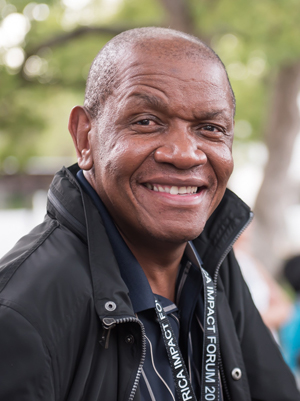 Dr Ayanda Ntsaluba was born in the Eastern Cape on 31 May 1960 and completed his primary and secondary schooling there. He matriculated in 1976 at St John’s College in Umtata and the following year registered for a medical degree with the University of Natal (Durban).

Graduating with MBChB in 1982, Dr Ntsaluba did his internship at Umtata General Hospital and continued to work there as a medical officer until September 1985, when a period of detention and solitary confinement interrupted his work. On release from detention, he felt compelled to leave the country and go into exile. It was six years before he came home to stay and reclaim his plans to specialise in obstetrics and gynaecology.

Soon after leaving South Africa, in 1986 and 1987, Dr Ntsaluba had the opportunity to study international relations, political economy and philosophy at the Moscow Institute of Social Science. But the majority of his years in exile were spent in Southern and Eastern Africa – in Zambia, Angola, Tanzania, and Uganda – working in numerous health facilities, primarily attending to the health needs of the scattered South African community of exiles.

1990 saw the unbanning of South African liberation movements, the freeing of Nelson Mandela, and the propulsion of the nation into four years of political transition. Dr Ntsaluba spent the first year of that transition in London, where he completed an MSc in Health Policy, Planning and Financing at the University of London.

Between 1991-1995, Dr Ntsaluba undertook his specialist training in obstetrics and gynaecology, and upon completion, he was admitted as a Fellow of the College of Obstetrics and Gynaecology of South Africa.

He served as the Director-General of Health from September 1998 to August 2003. During this period, he served on several statutory bodies like the board of the Medical Research Council (SA) and the Health Professions Council of SA, and he represented South Africa in numerous international fora.

He also chaired the steering committee of the South African AIDS Vaccine Initiative, and he served as a member of one of the working groups of the World Health Organisation Commission on Macroeconomics and Health.

In September 2003, Dr Ntsaluba was appointed Director-General of Foreign Affairs of the Republic of South Africa (currently known as the Department of International Relations and Cooperation) – a task he performed until March 2011. In this role, he oversaw the evolution and the implementation of South Africa’s foreign policy. He had overall managerial responsibility for South Africa’s diplomatic relations across the globe.

In July 2011, Dr Ntsaluba was appointed as a Group Executive-Director of Discovery Limited – a position he holds to date. He brings a broad range of experience to the Discovery team – health care expertise, operating in foreign markets, government relations, and general management.