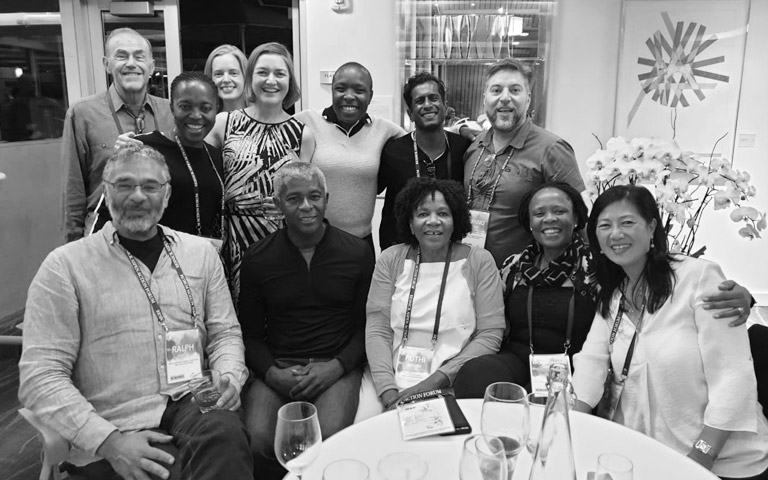 The Resnick McNulty Action Forum is a platform of engagement aimed at bringing together Fellows of the Aspen Global Leadership Network—a network that ALI is a proud member of.

The Resnick McNulty Action Forum facilitates conversations around professional development and active citizenship. Every year, the Forum welcomes more than 350 entrepreneurs from over 30 countries to discuss the most pressing global challenges. ALI Fellows, Andy Kawa (Class VIII: Mahube), Basani Maluleke (Class IX: Tariro) and Itumeleng Mahabane (Class XI: Tekano) attended the Forum and were kind enough to share their experiences with us.

I had the opportunity of attending this year’s Resnick McNulty Action Forum a few weeks ago, courtesy of a sponsorship by the McNulty Foundation. I left for Aspen in low spirits and returned rejuvenated and full of hope. The experience was just what the doctor ordered.

The theme of the conference, titled Borders: Within and Around Us, kept us emotionally charged for four days, be it in plenaries, seminars, watching theatre or thematic group discussions. As much as we recognised some boundaries to be necessary for practical functioning, we all agreed that we would be better if we had fewer boundaries and more bridges in our lives. I’d like to share the closing poem, Wide Open by Dawna Markova, which is a torch from Aspen.

I will not die an unlived life
I will not live in fear
of falling or catching fire.
I choose to inhabit my days,
to allow my living to open me,
to make me less afraid,
more accessible,
to loosen my heart
until it becomes a wing,
a torch, a promise.
I choose to risk my significance;
to live so that which came to me as seed goes to the next as blossom
and that which came to me as blossom, goes on as fruit.

Basani Maluleke – A Balm for the Soul

The Action Forum is a very special event. Spending a week in breathtaking surroundings, having meaningful conversations with likeminded people from all over the world, is a balm for the soul.

As the national conversation in South Africa becomes more polarised because of our politics, the under-performing economy, etc, this year’s Action Forum theme allowed me to reflect on the fact that the world is in turmoil and the need to be more sympathetic to other people’s struggles. Furthermore, in all this turmoil, it’s enough to focus on improving only one person’s life or focusing on a single cause. And if we all do that, we can emerge from the turmoil all the better for having gone through it.

Itumeleng Mahabane – On Contradiction and the Resnick Pilgrimage

I recently went on my first Aspen Global Leadership Network (AGLN) pilgrimage, the Resnick Action Forum. Earlier this year, I heard and then read about journalist, author and Henry Crown fellow, Anand Giridharadas’ book titled Winner Takes All. In a review, the Guardian says the book “takes aim at the modern plutocratic class that gathers at Davos and Aspen with the stated intention of making the world a better place, what Giridharadas calls in his subtitle: The Elite Charade of Changing the World.” I decided there and then that I would be going to the Resnick Action Forum; I had to see for myself what had so incensed Giridharadas about the 2015 Action Forum that not only had he delivered an impromptu criticism of the AGLN, it had also inspired the book. I watched Giridharadas’ his speech, The Thriving World, The Wilting World, and You, and it was powerful and provocative. I have not read Winner Takes All,  it is on my priority reading list. What I did read, going into the Action Forum, was several reviews of the book. One that I thought was powerful and resonant was by FSG’s Mark Kramer, in the Stanford Social Innovation Review. It is well worth reading. A key takeaway is a reminder that the people who gather at Aspen bring unique capabilities and problem-solving perspectives that contribute increased understanding of how business can be part of the solution to the social and environmental threats facing the world.

It is true that Resnick is not always a pretty sight. Some of what I saw seemed so tone-deaf, I could imagine how it might have inspired Winner Takes All. At times, I was reminded of a client some six or seven years ago, who wanted help with a social value strategy and yet when we asked him the question “What is the company’s purpose?”, he looked at us quizzically and responded, “To make profits of course”. Yet, much of what I saw, the sessions I was in, was purposeful, passionate and on point. These were more likely to remind me of another client, whose answer to the purpose question was “The purpose of any organisation is to survive. Key to survival beyond commercial and competitive strategies is to be socially relevant.”

There is a valid criticism that is hard to ignore about a group of elites getting together to talk about how to change the world; insiders engaged in closed dialogue about how to open up their worlds and dismantle their privilege. Yet, so often, we hear that change begins with insider conversations. You hear it on race and you hear it on gender. Gender and race, we are often told, are not female and black problems—they are male and white problems. So, the solution begins with whites engaging fellow whites and men engaging other men. It is intuitively hard to dismiss the idea that change comes, in part, from challenging your group. What of class?

It would seem to me that, in much the same way that there are conversations that men and whites could more effectively and usefully have among themselves, so too is there merit in ‘capitalists’ and their managerial Shoguns getting together to look at the world as a series of problems to which they might have contributed and which need to be solved. In my experience, most people outside the corporate world not only view it with suspicion, but they are also unable to recognise its true attributes; the ability to aggregate and institutionalise financial and human capital and translate it into core competencies. One needs insiders to fully appreciate the true potential social value of a corporation’s capabilities and competencies. To be fair, this was Giridharadas’ lament, that the Resnick conversation demonstrates no challenge of the status quo.

The Resnick I experienced would fail Salman Rushdie’s test of a democracy; it is very much a polite tea party. So perhaps, in many ways, it is evidence of what Giridharadas calls the “Aspen consensus.” It may be that part of the issue is that the Aspen Seminar pushes us to look within, to challenge ourselves rather than to look at the outside world, at structure. As I moved between sessions and conversations, I had that sense of polite consensus couched in high minded purposefulness. But I also tripped into one or two difficult, adult conversations. Resnick seems replete with contradiction, as indeed is the AGLN. Resnick and the AGLN do not promote activism and revolutionary inclinations that Giridharadas calls for. This conversation is, of course, fascinating to me because these themes play powerfully in South Africa, and within my group. I imagine that is the case with almost all the classes across all the initiatives. My fellows have asked the question, who are we elites to imagine we can discuss dismantling privilege? Privilege is taken away, never surrendered. As someone who trades in splitting hairs, I find that framing the world in binaries invites contradiction. That is not itself necessarily a bad thing. I believe that when we see contradiction we should see an opportunity step into and embrace it.

Contradiction is a major theme in Marxism that has been tackled by everyone, from Mao Zedong to Frederick Engels, who wrote: “if simple mechanical change of place contains a contradiction, this is even more true of the higher forms of motion of matter, and especially of organic life and its development.” I prefer Mao Zedong’s more pointed comment: “without contradiction, there would be no struggle.” This set up  an elegant and appropriate closing sentiment from Frederick Douglas: “if there is no struggle, there is no progress.”