HomeBreathe out: A Big Victory Against Gender Based Violence 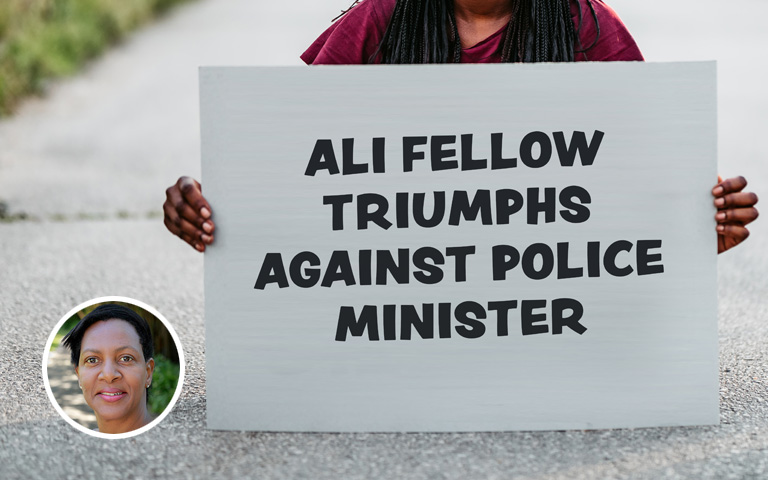 Earlier this month (April 2022), the Constitutional Court handed down a precedent-setting judgement that has shaken the law-enforcement community of South Africa, and beyond.The woman who drove it, over a period of a decade, is Andy Kawa (Class VII: Mahube).

The judgement in question relates to police treatment of victims of abuse. It confirms that the South African Police Service (SAPS) has duties not only around preventing gender-based violence (GBV), but also in reasonably assisting in securing sanctions against the perpetrators – failing which, they can be held liable for the secondary trauma that manifests. The ripples of this judgement will be felt, inevitably, beyond GBV and into all areas where the police fail in their duties towards society.

The back story is a brutal one. Late in 2010, Andy was taking a walk on Kings Beach, Gqeberha, while waiting for a flight to Johannesburg. She was approached by a knife-wielding man who forced her into the dune bushes, blindfolded her and, with four other men, gang-raped her through the night, for almost 15 hours. It was morning before she managed to escape and get help from some joggers on the beach.

The previous day, when Andy didn’t show up for her flight, friends and family had raised the alarm. Some hours later, her car was found at Kings Beach. It had been broken into, and her goods stolen. The police responded, hitting the beach with foot and sniffer dog patrols; and a helicopter search was instituted. They failed to find her.

Andy’s court victory was a function of the ConCourt judges’ assessment that notwithstanding efforts made, the police had not fulfilled their constitutional duty that night, nor did they do a diligent investigation. The search stopped, for no apparent reason, short of where she was being held. Andy says the police did not promptly obtain physical evidence; they did not interview potential suspects and witnesses such as the dune dwellers in the area Andy had been held; they did not follow leads.

Though someone was later arrested in possession of goods stolen from the car, he could not be linked to the attack on her; her assailants have never been found. Andy wrote her story in the award-winning book Kwanele Enough: My battle with the South African Police Service to get Justice for women.

In 2012, frustrated at the lack of action and mindful of the generally dismal state of prevention and enforcement in the realm of GBV, Andy instituted a negligence case in the High Court against the Minister of Police. Shortly after, the organisation People Opposing Women Abuse (POWA) tipped her off that the case had been withdrawn in a trial to which she had not even been subpoenaed. The following month, fortuitously, Andy was invited to speak at the 20th Anniversary of the Rape Crisis Centre in Port Elizabeth. Knowing the Minister of Justice was in attendance, she used her case to illustrate the loopholes in the system that rob crime victims of justice. Put on the spot, the Minister apologised, and committed to have her case re-opened.

Six years later, in 2018, the High Court found in her favour.

But the journey to justice was far from over. Alarmed at the implications of the judgement, the police appealed; in 2020 the Supreme Court overturned the High Court’s judgement, saying there was not the necessary evidence of negligence, wrongfulness and causation.

So Andy went all the way to the Constitutional Court, arguing that her case raised significant constitutional questions. And on April 5 she finally got what she had been looking for on behalf also of the millions of victims of GBV: a judgement that emphasises the constitutional duties on SAPS to protect women and children, and to promote and fulfil the objectives of the Constitution. It sets a precedent for South African jurisprudence and international law.

Who is Andy Kawa?

Andy holds Masters degrees from Wharton Business School and Columbia University in the US in addition to her first degree from Walter Sisulu University. She is a successful businesswoman, and has sat in the boardrooms of listed companies in SA, in the US and in the UK. But it is through her activities as a human rights activist that she is, perhaps, best known to many people.

Andy founded the Kwanele-Enuf Foundation (“kwanele” means “enough” in Xhosa) and developed and launched at several universities the Kwanele-Enuf Zero Tolerance Campaign against GBV. She organised marches, rallies, town halls and police forums to draw attention to un-investigated cases and inefficient law enforcement. These have dramatically raised the profile of GBV in this country and have, amongst other things, precipitated Nelson Mandela Metro over time to commit more than R60m to upgrading the Kings Beach area with a focus on safety. She’s also been active in global GBV initiatives, including motivating more than 3 000 people to participate in the global movement One Billion Rising movement.

Andy’s pledge, on joining ALI and the AGLN, was “to ensure that cases of gender-based violence in the country are properly investigated instead of being thrown out of court”.

Notably, Andy activism took place in the midst of post-traumatic stress disorder (PTSD) and debilitating depression. “My livelihood disappeared in front of my eyes, and I was like a vegetable: my daughter had to become my carer. The only thing that could get me out of bed over this time was this need to get restitution, and the realisation that the police would never change until something was done.” Now that she knew the statistics and was living through the consequences of police failure, “I knew I could not live with myself if I did not do anything, and victims continued to suffer this way.”

The reality that led Andy to institute the case against the Minister of Police was a cynical one. Her daughter, who was clerking at the Constitutional Court at the time, felt her mother was unlikely to get justice through the courts,……… unless at a huge personal cost. However Andy felt she could not live with herself if she did nothing. Andy reached out to different organisations to see how they could help and, in the end, it was agreed that the intervention needed was a legal one.

The law firm which in the end took Andy to her successful conclusion this April was a team from Norton Rose Fulbright led by David Kapelus. “They have a conviction that different parts of society can all play a role in ending GBV; and their role was legal services. They went way beyond any tick-box exercise in pro bono services.”

Where to from here?

In her own official comment after the case was concluded, Andy said:

“…Even with this ‘win’ I somehow still feel an emptiness. This emptiness comes from the chasm between law and justice – for jurisprudential scholars who study Hegel the difference between law and justice is an interesting philosophical debate, but for victims of harm it is simple. I understand that the law did its job but on a viscerally personal level I do not feel that justice was served.

Andy’s body just shut down after receiving the news of the court decision. “I have been carrying the stress of this case for 12 years. So has my daughter.

So, Andy is in a recovery phase. She recognises it is going to take some time emotionally and physically to deal with the release of the stress, and to recover from the depression.

She has, however, changed the world for tens of thousands of those who have been and will be victims of crime, including GBV. Paragraph 3 of the judgement says:

“The State has a duty to protect women against all forms of gender-based violence that impair their enjoyment of fundamental rights and freedoms. It has to take reasonable and appropriate measures to prevent the violation of those rights… The courts are also under a duty to send a clear message to perpetrators of gender-based violence that they are determined to protect the equality, dignity, and freedom of all women”.