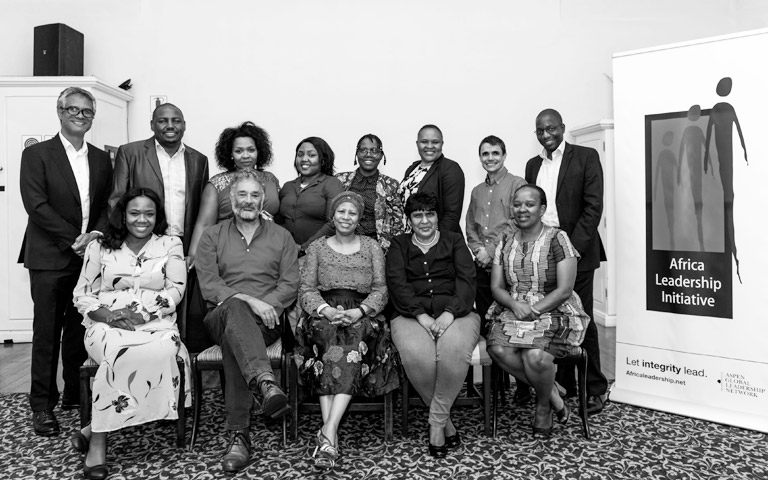 From SAA to the SABC, from Transnet to Eskom, state-owned enterprises (SOEs) are in a crumbling crisis of mismanagement. Instead of being the solid scaffold on which society rests, their combined failures and frailties are shattering confidence, and ruining South Africa’s reputational capital.

What can and should interested and concerned people do about it?

At one of ALI’s regular dialogues, in March, Khanyisile Kweyama was invited to catalyse this conversation. Khanyisile has lived a life of influence and commitment, being active – and an activist – across the private and public sectors and in civil society. She is deeply familiar with SOEs, having sat on the boards of Telkom and the SABC; and she is currently Chair of the Board of Control of the Passenger Rail Agency of SA (Prasa).

The conversation at this Dialogue was sober. An overview of the history of the ANC-led struggle cast light on some deep connections during the struggle years to “bad people” who leveraged their connections with certain individuals who later held powerful jobs in government, promoting “bad practices” which ultimately cascaded into what was referred to as the cancer of corruption in SOEs. Like the bad apple in the barrel which spoils the apples around it, corruption spread out in certain quarters, becoming endemic; and the cynicism of those who allowed it hastened the rot. The complexity of thinking about how to “fix” this hung dauntingly over those in the room.

But, said Khanyisile, there is no option but to fix it, and that requires a new commitment to governance, and political will.

“Some good people have gone into SOEs and have changed; have become bad people,” she said. “Intelligent people have been sucked in, and become part of the problem.” Brian, Lucky, Siyabonga, Hlaudi… the names of individuals who have become synonymous with graft in SEOs rolled off her tongue somewhat regretfully – bright minds, she said, people who had initially held great promise, but who had been sucked into some kind of megalomaniac belief that the SOEs they ran were their own fiefdom. “We have to look at the psychology of these people – when they are in that space, they truly believe it is their company to do with as they please. Everything then has to be shaped to create legitimacy around what it is they are doing.”

The well-established pattern is to employ cronies in key positions – as heads of HR, procurement, and finance. Khanyisile used the analogy of a tree of many branches, each representing a person who is “in” on the game of subverting governance, and is able to reduce or eliminate the gatekeepers to looting. She acknowledged the tension implicit in being a political appointment, and then having to perhaps resist the relevant politician. But, stating what should be obvious to anyone of principle, she said “you can still do the right thing. You don’t have to be at the bidding of the politicians. Politicians are politicians, but there are ways of saying: Don’t interfere.”

And there’s a necessity to do so, she says, on more than one level. As politicking picks up in advance of the May 8 general election, more politicians – including Prime Minister Cyril Ramaphosa – are harnessing the anger of disaffected voters for votes, by amping up the conversation about SOE failures, promising that they will put them right. “When and how do we influence politicians to understand the impact of what they say and do?” asked Khanyisile. “As an example, I treat Prasa as if it were a listed entity. Each and every noise you make affects the share price. We need to get politicians to realise that the noises that they make affect the share price of South Africa. While they’re electioneering for votes, there’s a short-term gain for them, but the bigger impact is one that hurts South Africa.”

The room agreed that putting incorruptible people in the top jobs, and making it possible for them to put good people into key roles, reinstating professionalism, is where change must begin. Adopting King and appropriate governance is another driver of success – including disallowing apparent inertia to be used as a tool of sabotage. Khanyisile shared an example of this: “In 10 months at Prasa we have not been able to appoint a recruitment agency, so we are not able to make key appointments. HR has to draw up the spec, and Supply Chain has to action it, and they keep getting it wrong…. They’re buying time.” A third necessary driver of positive change, thus, is managing both downwards and upwards; employees and politicians.

A fourth problem area that was raised was the high funding of political parties, which has been a driver of corruption and State Capture. “The ANC and other parties should not be the employer of choice,” Khanyisile pointed out, as this drives the required volumes of funding to very high levels.

And a fifth issue that taxed the dialogues was the apparent insouciance of those who looted. “There has been quite a history of the lack of consequence management,” Khanyisile said. “When we discover corruption, we need to make the decision to dismiss the perpetrators. We know they will fight it, and that they’ll go to the CCMA, but in the meantime, they’re out of the system, and the message will have been sent to the system that we won’t allow this kind of thing anymore,” she said firmly.

In the discussion, the question was raised about whether it might be more effective to start all over again. “A lot of these institutions were defined in the 30s and 40s,” one Fellow pointed out. “They were relevant for the time, but isn’t it time to start a conversation about whether we should fix them or redefine them altogether? I wonder if we can’t radicalise the situation, and revisit what they do?” Another paradigm-shifting thought was about the conversations Government might be having with organisations tainted by State Capture but who have tried to make good – such as, with consultants McKinsey, whose seminal report on Eskom may contain some answers to the current crisis.

As Zohra Ebrahim said in introducing Khanyisile, she has a rare independence of mind and the sort of character and experience that allow her to look at the complexities of any challenge and take solutions forward in the best interests in the county. So do many of the Fellows. The call is for all who are committed to the Good Society to step up, in whatever way they have influence, to reverse the narrative of State Capture, and give South Africa back its stable scaffolding.