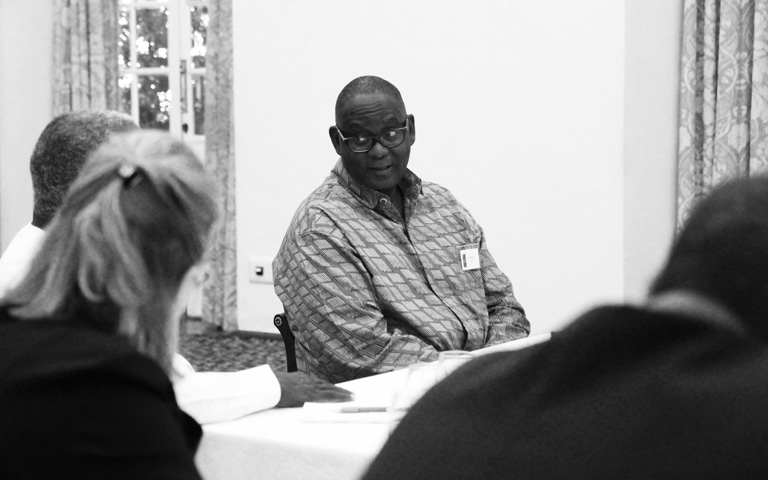 The third and final ALI Leadership Initiative Dialogue for 2016 was held on Wednesday, 16 November at the lavish Villa Arcadia in Parktown.

Former General Secretary of the Congress of South African Trade Unions (COSATU), and Vice-Chairperson of the Millennium Labour Council, Zwelinzima Vavi shared his views on the role of leaders and their contribution to a new South Africa, as well as key lessons learned from the past 20 years. The dialogue was chaired by Dele Olojede, a Fellow of the second class of the Africa Leadership Initiative-South Africa as well a member of the moderating team for Aspen Global Leadership Network.

Olojede curated a robust discussion between Vavi and the Fellows that touched on issues facing South African political leaders. Vavi identified three crises that South African leaders need to consider in order to improve the political, social and economic landscape in our country:

The burning question when looking into the dismal state our country is whether it is too late to resolve the political, social and economic landscape, is South Africa too far gone? There may not be one solution or one political party that will solve the issues, but one thing is true, South Africa and its people are resilient, and perhaps the solution lies not in political parties, but in mobilising the people towards a collective goal and finding leadership elsewhere.

Feedback from some of the Fellows who attended:

Ralph Freese: ‘We were extremely polite in the discussion, a more robust debate that tackles the flaws in the presentation. This was true at both dialogues I attended’

Hanno Kemp: ‘It was very refreshing to have so many diverse voices participating in such an honest and thoughtful space. I left with new inspiration and a lot to think about!’

Baba Mashologu: ‘The struggle, at its core, was for the dignity of our people. That dignity is not being achieved’ (on the day of a bail hearing in Middleburg where 2 white men put a black man in a coffin & terrorized him)

‘Now that we are in the freedom/ democracy dream, the dream is a nightmare. We have to find a way to dream again within the nightmare’

‘[Absent the ANC] there is no one in SA who represents the majority. We have a crisis of representation, of legitimacy’