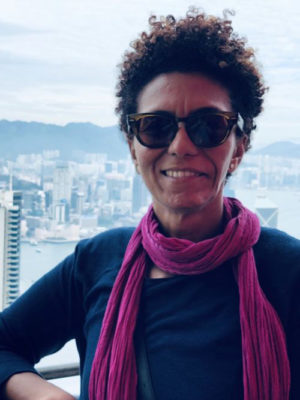 Over twenty years of work experience in media and development in Africa and South Africa. A multimedia journalist by training, Orderson has spent a decade reporting from conflict zones in Africa based in Dakar, Senegal before moving back to South Africa to work in different media newsrooms. Her work for the South African Broadcasting Corporation, The Africa Report, Aljazeera English, Turkish Radio and Television, IPS, Economist TV, The Guardian, Vrye Weekblad, among others, took her to places like Ghana, Nigeria, Kenya, Libya, India, China, Bangladesh and Sri Lanka.

Orderson is currently a Duty Editor at South Africa’s leading 24 hour news channel based in Johannesburg. Orderson is host of a Africa Friday on talk radio station 702.

Crystal is also the holder of the Mandela Scholarship that allowed her to complete a MA in Gender and Media at Sussex University in the UK. Orderson also holds a B-Tech in Journalism from the Cape University of Technology and BA (Hons) from UCT and post graduate diploma in International Journalism from the Hogeschool Utrecht.

Orderson has been involved in guest lecturing at Cape Peninsula University of Technology and  University of the Western Cape ; involved in several community based projects including the Women’s media watch project and the Rural Women’s Assembly. Orderson is currently a Board member of the Bulungula Incubator project based in the Eastern Cape.