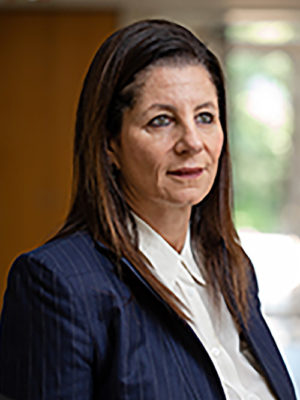 Dionne Ellerine was born and raised in Johannesburg, South Africa. She graduated with a B Com LLB from the University of Witwatersrand and was thereafter was admitted as an Attorney of the Supreme Court of South Africa.
In 1998 she moved to London where she worked at Stenham Property focusing on managing commercial property investments for offshore clients across the United Kingdom. After 11 years in the United Kingdom she returned to her roots in Africa and joined her family business where she drove the family’s new vision of transition from an operational focused entity to a long-term investment holding company.

She was appointed as a director of Ellerine Bros in 2006 and has overseen all its large real estate investments and new developments which include Canal Walk (Cape Town), The Glen (in the south of Johannesburg), Fourways Crossing Centre (in Fourways) and 35 Lower Long office building (Cape Town CBD).
The Ellerine family’s other core focus has been investing in listed shares and unlisted companies in predominately, South Africa and Europe.

Dionne serves as a non-executive director on the boards of key holdings such as Newpark REIT Limited, EPP NV and RBH Hospitality Management. On the Newpark REIT Limited board she is the Chairperson of Remuneration and Audit Committee.
Dionne is an active member on the investment committees of private equity focused investments such as Capricorn Capital Partners Investments, Avant Garde Capital and the Trademarc Property Fund.

Currently she is still serving as the Chief Executive Officer of Eric Ellerine Trust (Pty) Ltd and remains an active director of Ellerine Bros and all other family related entities.