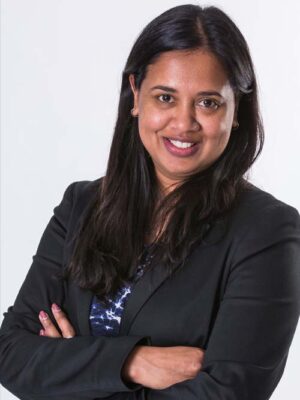 Yogavelli is a social change activist and an impact-driven entrepreneur. She is the Chief Executive Officer of the Allan Gray Orbis Foundation. She serves on the boards of E-squared Investments,  the Aspen Global Institute South Africa, and the Global Advisory Board of the Aspen Network for Development Entrepreneurs (ANDE).

Yogi leads the Young Presidents’ Organisation (YPO) Diversity and Inclusion portfolio on the continent and the Mentorship portfolio in the Cape Town chapter. She is a member of the Womanomics Africa™ Advisory Council, a pan-African entity promoting entrepreneurship among women. In 2020 she delivered a Tedx talk titled “Entrepreneurship education is a human right”. She has also co-authored a chapter on women entrepreneurship in the book “Women leadership in emerging markets”.

Yogi founded the Entrepreneurship Development Academy at the Gordon Institute of Business Science (GIBS) in 2014, offering scholarship-based education and support to previously marginalised start-up, micro and small enterprises.It was commended by Cabinet and received various awards.

Prior to that she was Country Director of the Goldman Sachs 10,000 Women initiative and Founder-Director of both the Enterprise Development Council of South Africa (EDCSA) and the African Social Entrepreneurs Network (ASEN). During this time, she taught on the GIBS Social Entrepreneurship Programme on business models for social change.

Yogi founded and ran two businesses: an experiential high-end travel company; and a social development advisory company. During this time, she was part of a team that wrote the country’s 10-year National Youth Development Strategy. Before entering the entrepreneurship world, Yogi worked in the women’s human rights and disabilities sectors in India for seven years, for which she was featured in the 2014 book “Inspired” by Jennifer Renton. She holds an MBA from GIBS and degrees in Development Studies, and Community and Health Psychology from UNISA.