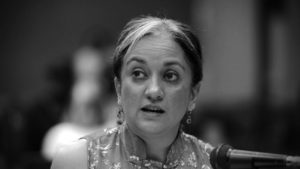 The 2015 International Press Freedom Award was presented to Africa Leadership Initiative SA Fellow and journalist Ferial Haffajee by the Committee to Protect Journalists.Ferial Haffajee is the editor-in-chief of the local privately owned weekly City Press in South Africa. She was also the editor-in-chief of the weekly investigative paper the Mail & Guardian. Under her leadership, both papers have broken important stories, including “Nkandlagate”–the controversy around the alleged use of public funds for improvements to President Jacob Zuma’s homestead.

Haffajee is no stranger to controversy. In 2012, after City Press published a photo of a satirical painting of President Jacob Zuma, called “The Spear,” she was met with fierce criticism and threats of violence against herself and her staff. A senior government minister called for a boycott of the newspaper if it didn’t take down the image from its website. Ultimately, Haffajee removed the image, but was criticized from other quarters for doing so. Upon reflection, she said she should not have done so. She has described herself as a “free speech fundamentalist.”

In 2006, Haffajee and the Mail & Guardian were threatened for publishing cartoons of the Prophet Muhammad. She said she believes she was particularly targeted because she is a Muslim. During her editorship, the Mail & Guardian regularly fought court battles against powerful elites that tried to impose pre-publication censorship on the newspaper, prompting Haffajee and her team to spearhead a campaign against the use of this tactic. In 2012, judgments by both the Supreme Court of Appeal and the Constitutional Court upheld the media’s right to “publish and be damned.”

In October 2013, Haffajee spoke out against racism in the City Press newsroom, criticizing certain black colleagues. This triggered a heated debate that she was being racist and that she had not “transformed” her newsroom. Haffajee tweeted: “City Press has 8 editors (5 black, 3 white; 4 women, 4 men). We have 68% black staff; about 45% women and a vacancy total of 5.”

Haffajee’s prior positions include senior editor at the Financial Mail, where she was responsible for political reporting and covered the presidency and the tripartite alliance; radio producer at SABC, where she interviewed Nelson Mandela after he was released from jail in 1990; and cub reporter for the Mail & Guardian, where she later became media editor, economics writer, associate editor, and, finally, editor-in-chief.

The text of Haffajee’s acceptance speech, as prepared for delivery, is below.

Twenty years ago, our founding father, Nelson Mandela, set the bar high for what media freedom and free expression would look like in a democratic South Africa. Here’s the standard he set: “A critical, independent, and investigative press is the lifeblood of any democracy.” And so we are.

As a journalist who worked in decidedly un-free times and who reported the arrival of freedom, I have relished the protection of our Constitution as a vital institution in our society. Our robust media with its investigative bent and trenchant style is a thing of pride.

Nelson Mandela continued: “The press must be free from state interference.”

Here, things get more complicated.  The instinct of power is often to shut down uncomfortable truths.  The media in South Africa faces the real threat of a secrecy law that will harm a critical and independent press.

In addition, we labor under old apartheid statutes which have not been scrapped.

When I remind powerful people that Mandela said, “It is only a free press that can have the capacity to relentlessly expose excesses and corruption,” they swat it away.

But Mandela’s vision is being eroded. We are often in court, at great expense, to keep open the promise of freedom made 20 years ago. I’ve come to learn that it is a truism to say that the price of freedom is eternal vigilance. The temptation to secrecy is easy. Transparency dims.

In neighboring Swaziland, Africa’s last absolute monarchy, there is no media freedom. Right now, a human rights lawyer, Thulani Maseko, and journalist Bheki Makhubu are jailed there. Their crime: exposing how judges were playing fast and loose with the public purse. Last month, I had the privilege to meet Bheki’s wife, Fikile, who cried after accepting a Media Freedom award on her husband’s behalf. Life is hard for her.

I accept this great honor in Bheki’s name and pledge to do more to help get him released–as well as our colleagues imprisoned in Ethiopia.

A journalist’s place is not in jail. It is on the street, in the newsroom, raking the muck, holding power to account to make a better country and continent. As Madiba said: “It is only a free press that can be the vigilant watchdog of the public interest against the temptation of those who would abuse power.”

The #SecrecyBill has no place in a democratic & free #SouthAfrica. Send it for Constitutional Court review #IPFA.