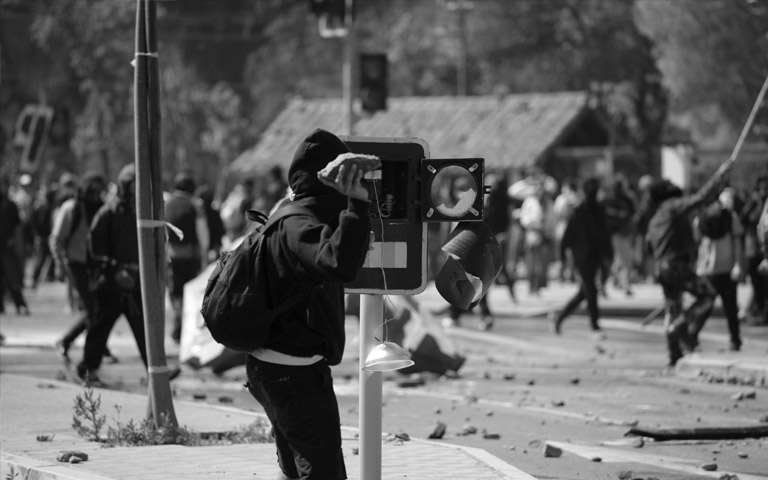 Between them, Adriaan Basson (Class XIII), Ferial Haffajee (Class II) and Mondli Makhanya (Class III) represent three of the most credible news sources in South Africa: News24, Daily Maverick and City Press respectively. If anyone should know what’s going on, it should be they. So, these are the things we seem to be able to be sure about at this stage:

What took place in KwaZulu Natal was an orchestrated insurrection. There was a targeted misinformation campaign before and after Zuma went to jail, Adriaan pointed out; the posters calling for destruction were professionally designed, in the same style as struggle posters; there were clear modus operandi. More than 100 network towers and several community radio stations were vandalised, and many warehouses and shopping centres were torched once they had been emptied. All this indicates a deeper intention.

Although law enforcement agencies should have anticipated trouble, they apparently did not. We have known, said Mondli, since the reinstatement of charges against Zuma, what the likely outcome would be. In the days between the passing of the sentence and Zuma’s incarceration, all the signs were there, and all the opportunity to prepare. But still, any security action was too light, and way too late. Generally, it is believed the comprehensive non-response from state security divisions was less likely to be purely a function of rank incompetence, than to indicate also a degree of complicity in some quarters.

The looters weren’t afraid. The looting was casual, taking place in the glare of TV cameras; interviewees and video uploads were defiant and self-justifying. That disregard for social norms speaks either to a confidence that there would be no sanction – further evidence that the forces of law and order have broken down – or to a confidence in some kind of protection.

Related? Not related? It is not clear how the Gauteng violence was linked to the insurrection in KwaZulu Natal, but we know it was organised, and involved organised crime. The damage was limited through a much more effective law enforcement response. Very shortly afterwards, a sophisticated cyber attack on Transnet’s systems disabled South Africa’s ports for nearly a week. There are suspicions that this, too, was related to the insurrection.

So we have an insurrection, and we have criminal syndicates. We also have opportunistic looting at scale, which ended only when there was nothing left to steal. “Those behind this thing were clearly organised and orchestrated,” said Mondli. “They were building up to something; Zuma was just the trigger they were looking for.”

President Cyril Ramaphosa’s non-action drew plentiful criticism, with speculation that he is disempowered, or simply incapable of the decisive action required. His team is known to be in disarray, even without the added back-room foment of Zuma’s allies. Any residual confidence in the Security Cluster was eroded as Police Minister Bheki Cele, State Security Minister Ayanda Dlodlo and Defence Minister, Nosiviwe Mapisa-Nqakula squabbled amongst themselves; the Cabinet shuffle that followed in the first week of August acknowledged this while still inexplicably retaining Cele, one of the most problematic of Ramaphosa’s Cabinet, in his seat.

Any political explanation for the whirlwind of destruction is, as Ferial said, hard for Ramaphosa to look at. “It’s located at home. They will step away from making the hard look in the mirror.”

The political explanation is, however, compelling. Networks have been destabilised by the National Prosecuting Authority (NPA), the Zondo Commission and the step-aside rule; personal and political fortunes have been taken out. “I think,” said Ferial, “this is the fallout. Those who were part of state capture are fighting for their political lives.”

It’s common cause that there has been division, plotting at branches and as far to the centre as Luthuli House; the narrative has been pushed hard about white monopoly capital being the root of deepening poverty and unemployment, with radical economic transformation (RET) being the only solution and centrists being sell-outs. As Ramaphosa tried to move the party away from the looting of the Zuma era to service and proper governance, so the plotting doubled down, building on old fault lines. The RET faction badly wants back into power.

So, where does that leave us?

We have been confronted, said Ferial, with Omelas. “How do we reshape this dastardly form of capitalism that we have in SA, that has not been reshaped in the past 20 years? What do we do about the cost of data? What do we do about the structural lack of competitiveness in our society, that has ruined so many small businesses? Why don’t we speak about the huge gap between what executives – including those on this call – and their employees earn?”

Nick Binedell of the Gordon Institute of Business Studies (GIBS) agreed. “You cannot have a liberal democracy in such an unequal society. This fire will come around again.”

Quoting political analyst Gogo Matshiqi, “the biggest danger from this moment is to emerge with a single story,” Yoliswa Msweli (YALI) wrote in the chat: “So, whilst it is obvious that it is the political context that has gotten us to this moment – the systemic issues have empowered the most excluded communities to rise. We all know that in the townships, amaphara (parasites – unemployed youth focused on community-level criminals) are effectively a movement. I understand that they were the vehicles in most localities. Is this not also the material issue of the moment, that is here to stay and is more material than the political issue right now?”

Yes, said Ferial. “I believe that the conditions on the ground allow for a repeat.” She pointed also to political material – among other things, the racist tension that has been ignited in KwaZulu Natal. “The big danger now is that these people – faceless or not – will regroup. There is a local government election, and an ANC conference next year. They need to regroup and regain the ground they have lost over the last 8-10 months since Nasrec.”

A lot of the solution is going to have to be a political solution, she said. It is going to have to be a security solution. The security cluster have to work. The intelligence services have to do their job. But through it all, the weakest link, Ferial said, was Ramaphosa. For a critical week, he disappeared. As a nation, we felt directionless and parentless: there was no sense that there was a head of the family.

“But he is the only centre that we have, at this time.”

Mondli echoed Ferial’s frustration and the quality of Ramaphosa’s leadership. Ramaphosa has led the ANC since 2017 and led the country since 2018, and – as the country overwhelmingly wanted change – had political capital. But he knew, and people like former ANC Secretary-General Ace Magashula were explicit, that a faction wanted him out, and that, plus his “long-game” approach, appear to have paralysed him. “Over the past three years, what damage has been done?” Mondli asked. “Decisions not taken; people being allowed to actively work to undermine the country. Ramaphosa has run the state: it is time to take charge of the country.”