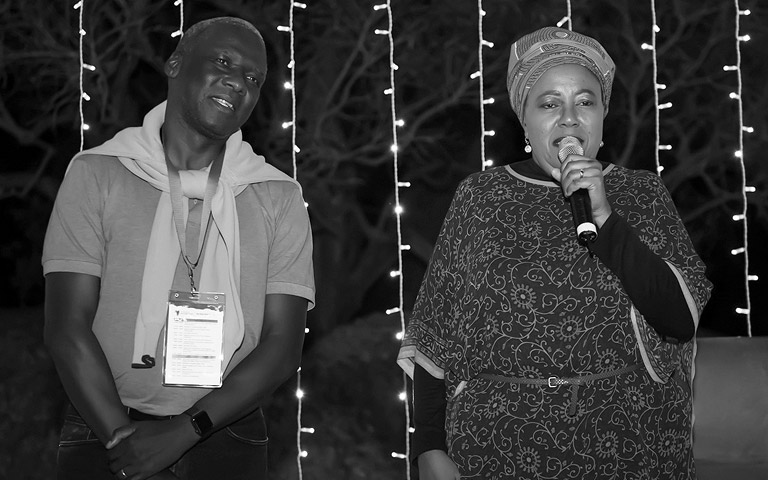 In the early 2000s, ALI Fellow (Class IV: Kalipha) and South Africa’s “First Lady of Song”, Sibongile Khumalo, released her hit single, Mayihlome (https://bit.ly/2L7vsy3). It would go on to be amongst the most loved songs within her illustrious discography of globally-acclaimed hits. Yet there was more to that particular song than poetic lyrics sung in her matchless voice. It was more than just a song, it was a call to action. “Mayihlome” is a Zulu word which means “let’s get armed”.

The period of 2000 – 2005 will forever live in infamy in the history of South Africa. At a time when the nation was wrestling against the highest rates of HIV/AIDS infection in the world and in an era where, according to UNAIDS, 15-year olds had a greater than 50% chance of dying of HIV-related causes if infection rates were not cut dramatically, the South African government was engaged in costly denialism of scientific consensus that HIV caused AIDS and with that implemented policies that prevented millions of HIV/AIDS sufferers from accessing life-saving antiretroviral drugs. By some estimates, in that period more than 330,000 people died prematurely from HIV/AIDS. It was into that very period where the HIV/AIDS conversation had been dangerously politicised that Mayihlome was released as a call to arms to the people of South Africa, and Africa at large, against the HIV/AIDS pandemic. “Mayihlome ihlasele!”, then, is a call to arms that means: take up arms and attack. With Mayihlome,Sibongile issued a call to action to her fellow Africans to fight back against the deadly virus. She called on the preachers to preach, the leaders to lead and all of us to take responsibility – lest the nation decimated – not least of all, the government to come to its senses. Her concern was not only limited to South Africa – In Plea from Africa (https://bit.ly/2YyUgSI), she petitioned on behalf of the whole continent when she sang: “God bless Africa, and her sons and daughters”.

At a personal level, Sibongile had become family over the years, over and above being a fellow ALI Fellow. When the news of her passing reached us in the early afternoon of Thursday it came as a total devastation to me, my wife Khumo and the children. As a Fellowship, the loss of Sibongile, like the loss of any Fellow, is also devastating. Our Fellowship represents a call to action towards social justice and a caring society – we mourn, today, the loss of one of our soldiers in responding to that clarion call. Others have lost a mother, aunt, sister, great friend, healer, and teacher, among the very many roles that she played in their lives. Our country and our continent too, have lost one of their treasures at a time that in many ways bears a striking resemblance to the early 2000s. Once again, we are confronted by a formidable and deadly invisible enemy with very tangible effects in the form of COVID-19. The disease is bad enough as it is, but its effect is aggravated by the persistent socio-economic destitution that the majority of our fellow Africans are trapped in without any plausible and accessible options of escape. We, especially as part of the elite in African society, are not responsible for the existence of COVID-19, however, by virtue of our privileges, access to and control of resources, let alone our membership of this esteemed community of values-based leaders have to contend with culpability for the persistence of the conditions within our communities, countries, and continent that make Africans among the most vulnerable people in the world to the devastating effects of this disease. Even though she may no longer be with us, Sibongile’s voice continues to implore us to shake off the lull of comfort and the temptation of passivity and despondency; it continues to echo that call to action: Mayihlome ihlasele!

Eschewing what seems like a growing tendency by those in leadership to lead by edict rather than by example; Sibongile not only called for action, she positioned her own self on the frontlines of action – putting her talent, resources and body on the line in pursuit of impact. In the sunset era of her life, though battling illness, she was actively working on a programme that sought to leverage the arts as a tool for societal transformation; moving it from the fringes of society as merely a form of entertainment and into the mainstream of socio-economic transformation. Through the programme, the arts would be used to tackle those issues and challenges that continue to undermine the ability of Africans to live lives that are fully expressive of the potential that they are no less endowed with than any other people on the planet. To be clear, Sibongile was quite open about the fact that she was not a person of great means, however, what she had, she gave. With what she had, she acted with diligence and urgency.

The occasion of her death is made infinitely more sorrowful by the fact that Sibongile died relatively young, just short of the threescore years and ten that the psalmist declares to be our just allotment. The consoling factor is that in spite of that she lived a full and esteemed life marked by action and activism. Her death, along with this moment in time in the world, gives many of us cause for reflection. Those threescore and ten years are neither promised nor guaranteed to us and when our time comes will our lives be defined by our actions or our inactions?

Of course, we have to resist the temptation, as we reflect, of patting ourselves on the back for mere action. Sibongile does not go down in history for merely having sung a few songs and carried a few notes, she goes down in history deserving of all of the laudations she has received because she sang with distinction, she served with impact, and she gave with all of herself. Indeed, action on its own is not good enough; not at a time when the vital signs of the health and prosperity of our people and planet are so dire. Most of us are acting, we are busy, yet the negative trends persist in many areas. Thus, how we act at this time is just as – if not more – important than that we act. We have to ask ourselves whether it can be said when our time comes, as it has been said of Sibongile, that our actions and the outcomes thereof were in just proportion to the powers, privileges and endowments that we enjoyed. As a point of personal reflection, I shudder at what that answer will be for me and our generation. Destiny has singled us out to be in the prime of our lives and careers at the exact time that the continent and world face up to some of the most perilous conditions seen in a lifetime. If we continue doing as has always been done, leading as we have always led, what chance do we have of reversing the trends that will define our era of stewardship? The need for change in how we act seems self-evident enough, yet, realistically it is hard, especially at the stage of life that many of us are in, to reengineer the very behaviours that have served us well and gotten us to where we are today, for fit to a new purpose, a greater mandate.

The level of sadness at the loss of a life so fully lived at what feels like so premature a time is overwhelming for all of us yet we have the message in her song and the example of her life to hold onto as we reflect upon the ways in which we will live out the remainder of our lives. Seneca said: “What man can you show me who understands that he is dying daily? Whatever years be behind us are in death’s hands.” I would add to the words of Seneca that whatever hours are ahead of us are in our hands and we have the opportunity – if not obligation – to reflect at the individual, collective, national, and continental level, as we say goodbye to our dear friend and sister Sibongile, how they will be used. “To whom much is given, much is required” – lives as privileged as many of ours are, place upon us an obligation that those hours that are ahead of us be applied towards doing more than just personal aggrandisement and towards meaningfully shifting the material conditions of the people of Africa. If we for one moment believe that to be impossible, we need only look at the example of Sibongile Khumalo’s life and lean our hearts towards the sound of her voice imploring, in that sweetest yet solemn of melodies: Mayihlome ihlasele!

May her soul rest in peace.