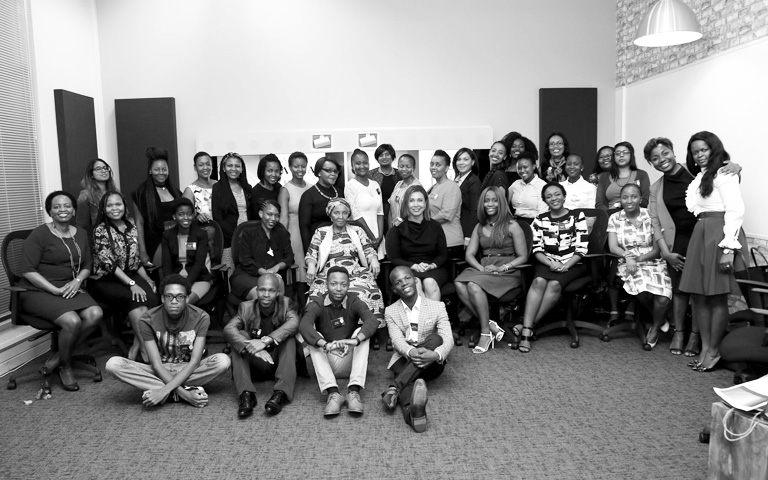 On the eve of International Women’s Day on 7 March, the Mentorship Circle was launched at The Campus in Bryanston. The Mentorship Circle is a collaborative mentorship program developed by Charmaine Houvet (Cisco), Sharmla Chetty (Duke CE, ALI Fellow), Lesego Sennelo (AWCA, ALI Fellow), Sindi Mabaso-Koyana (AWCA, ALI Fellow) and Grathel Motau (AWCA, ALI Fellow). The programme aims to equip, inspire and nature future leaders so they can in turn run a mentorship project of their own. The programme currently have 50 future leaders under 35 years old both males and females who are entrepreneurs, community leaders, business leaders, professionals and higher education students.

The evening began with an orientation session where the future leaders were asked to grab an inanimate object from their surroundings that best represented their personalities. They were then asked to introduce themselves by explaining how the object best described who they are. This served as an effective ice breaker and the future leaders were immediately at ease with one other.

The program them moved on to the official formal launch, Charmaine Houvet introduced the ambassadors and shared her well wishes and advice to the future leaders. Sharmla Chetty then introduced the Mentorship Circle team who will work directly with the future leaders; this was followed by an inspirational welcome video from Wendy Luhabe and opening remarks by Nolitha Fakude.

Former first lady, guest of honour and patron to the mentorship circle Mrs Zanele Mbeki delivered the keynote address. She opened by mentioning that her generation never had mentors and that mentorship came in different forms, you took what you could from many people. She stressed that mentorship is an integral part of development in this day and age and that those who are successful have a responsibility to pass on their knowledge to those who are still navigating their path “Every time we rise we must raise others, that way you lift as you rise”

In closing, Grata Motaung thanked the guests and speakers and commended the future leaders for their courage in taking on this commitment. She promised them that they would have full support and guidance in their journey, and that they would also be held accountable on their personal projects that they will develop to pass on the knowledge they will learn in the program.

Feedback from the future leaders:

“I am hoping to establish a legacy project that will pay it forward. I am about social development, the community; I am hoping this program will arm me the toolkit, strength, confidence to meaningfully interact with people in order to make a difference in South Africa and hopefully Africa as well”

“Like any other program, it’s what you make of it. I am hoping to get more career exposure, opportunities to network and establish mentorships. More than that I will get an opportunity to network with fellow future leaders and have a wider South African network”

“I am hoping to gain a deeper understanding of how I fit into the scheme of leadership, what kind of leader I am and can be”