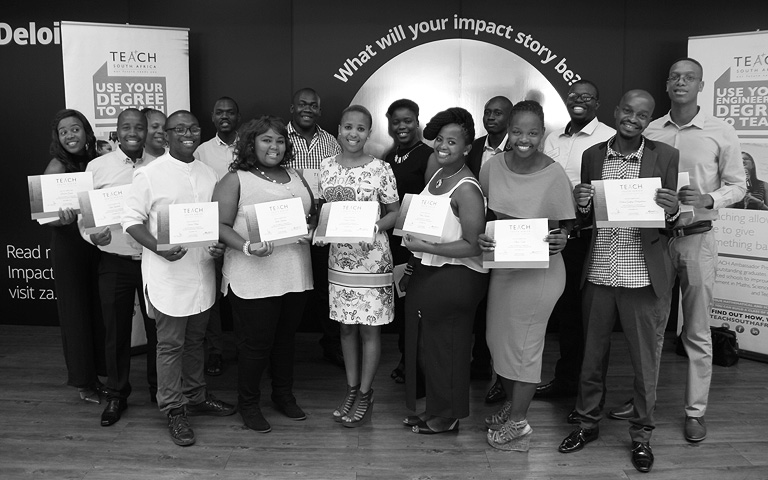 The TEACH South Africa (TEACH) 2015 Cohort graduation ceremony was held on Saturday, 10 November 2016 at the Deloitte auditorium in Johannesburg.

The ceremony was hosted by former graduates and ambassadors Berkia Banda and Camagwini Dolweni. Banda and Dolweni shared their own experiences of being TEACH graduates and the opportunities that this forwarded to them. They also encouraged graduates in their new paths and assured them that they their work will directly impact and change people’s lives.

Exiting ambassador, Madia Elekanyani shared his experiences from Winile Secondary School is in Zonkizizwe near Katlehong, where he was placed. He stressed that even though the program was challenging, he received valuable support from TEACH. Elekanyani echoes the words of Banda and Dolweni that the work he does helps shape and change people’s lives, and as an exiting ambassador, he is certain that he will remain a teacher.

Often, young people are reluctant to become teachers because of the perception that one cannot sustain themselves on a teacher’s salary and young teachers are often questioned on their career choices, why become a teacher when you can do anything? Alumni’s Colin Majozi and Reuben Xaba both spoke to the contrary. Majozi observed that most of his students used their mobile devises extensively; he saw this as an opportunity and built an EMS, Mathematics and Natural Sciences app for grades 7 to 9. Xaba started a Facebook page to celebrate teachers, Mzansi Rockstar Teachers; subscribers send in short video clips nominating their favourite teacher. Both Majozi and Xaba are excellent examples that one can do more than teach as a teacher but also inspire and challenge learners to excel in their chosen fields.

Keynote speaker Pius Gumbi, previous Chairman of the Southern African Power Pool and CEO of the Swazi Electricity Company; spoke on the importance of one needing more than just good grades in order to succeed. This is why the TEACH program is so valuable because it teaches more than educational skills. He encouraged the graduates to use the skills they have learn in the program to better the lives of others: “The best gift to give those who assisted you, it to pass on the message to others, the message lives on with you”

In closing, friend of TEACH South Africa Ursula Fear thanked the delegates, graduates, alumni’s, ambassadors and all those in attendance for coming to the ceremony. She stressed to the graduates that no matter their circumstances, greatness is in all of them, each of them are capable of greatness, and they are the future in its best. She congratulated them for completing the TEACH program and wished them the best for their future endeavours.

The next TEACH induction for the 9th Cohort starts on the 8th January 2017.

Education is not preparation for life, education is life itself” John Dewey

TEACH South Africa is an ALI SA project started by Dr Mothomang Diaho and Dr Futhi Mtoba, both fellows of the 2nd Class, Kilimanjaro and of the AGLN.