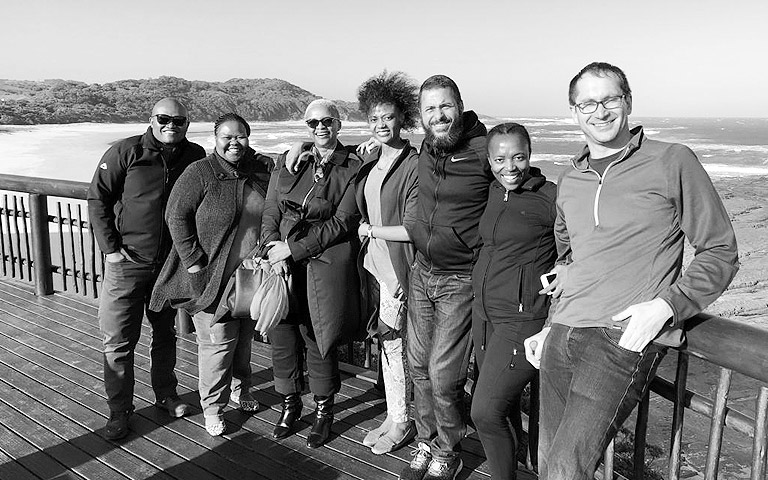 In September, ALI’s Class 10 Fellows had their second reunion at the idyllic Miarestate Hotel in the Eastern Cape. The Fellows spent time engaging in thought-provoking conversations, which were guided by readings that included A Pale Blue Dot by Carl Sagan, On the Shortness of Life by Lucius Annaeus Seneca, and Wide Open by Dawna Markova. The main topic of discussion was state-owned enterprises and privatisation. It was a weekend filled with reflection, poetry and catching up. Ideas were shared ideas, opportunities were explored and advice was given, as the Fellows took in the breathtaking Haga Haga vistas.

TOPICAL DIALOGUE ON THE PROGRAM:

The venue was idyllic and typically far from the madding crowd. Notwithstanding the remoteness of the location, technology was still easily accessible when required. For example, we had a resident X-Seeder as photographer obliging with aerial photos of the venue and the attendees (proof attached). The weather obliged and was as sunny and bright as the mood demanded. Even though some of us arrived later than expected (through some weird  and inexplicable coincidence that saw three usually punctual fellows miss their flight), we managed to get together at just the right time and in the perfect mood to kick-off what was to be an epic reunion.

Readings were just the right length; stimulating without being too taxing. We had a healthy mix of the thought-provoking (Walls), the rousing (On the Shortness of Life) and the real (A Pale Blue Dot). We even had a bonus poem which mistakenly got appended to the Bei Dao poem (The Boundary), which blended so well that we only figured out later that we were reading an inadvertently extended version. Even though we picked up that the tone of the second poem was different, we included it in the discussions anyway because it made sense to at the time. After all we had bothered to read it and it did enrich the discussion, if only to laugh at ourselves for the interesting error that had us doing some extra reading on the mysteries of life, love and heartbreak.

The rewards for trekking to the remote and beautiful Eastern Cape were the check-ins, catching up with our X-Seeder tribe, being honoured by the presence of an honorary young X-Seeder who joined her parents on the trip, Naledi, and being able to literally plug in to that positive energy that flows when fellows get together. The venue was another pleasant highlight with beautiful views, close to the sea and lovely hosts who added to the fun. Good conversations about topical national and international issues flowed along with good wine and delicious food. There was even a chance for sundowners near the beach, although this was almost spoilt by an anonymous little rodent who seemed intent on joining the fun by peeking his curious little face through the deck boards as we sat reading about The Pale Blue Dot. Throughout the weekend we made time to engage with each other, sharing advice, insight and understanding as we used the opportunity to share, debate, clarify and inspire each other.

Until the next reunion

The morning of our departure was extra beautiful, and we managed to trek to the beachfront where the beauty of the Eastern Cape had us all declaring our second reunion a resounding success. Even a nasty thorn injury sustained on the walk did not deter our spirits from wanting to return. Till next time, X-Seeders, rewind and repeat.

FacebookTwitterLinkedinIn November 1916, Pavel Milyukov, recognising the inability of the Duma to do the right thing, asked whether that was driven by stupidity or treason. Here, i...

FacebookTwitterLinkedin Just under a year ago, in the first week of July 2020, the Minister of Mineral Resources and Energy gazetted the procurement of 2 000 MW of energy “from a...

Investing in After School Programmes to stem learning losses, fight fast-growing inequality and build back better

FacebookTwitterLinkedin by Sibongile Khumalo Seventy percent of South Africa’s children enrol in low and no-fee (quintile one to three) schools. Pre-COVID-19, less than a third o...