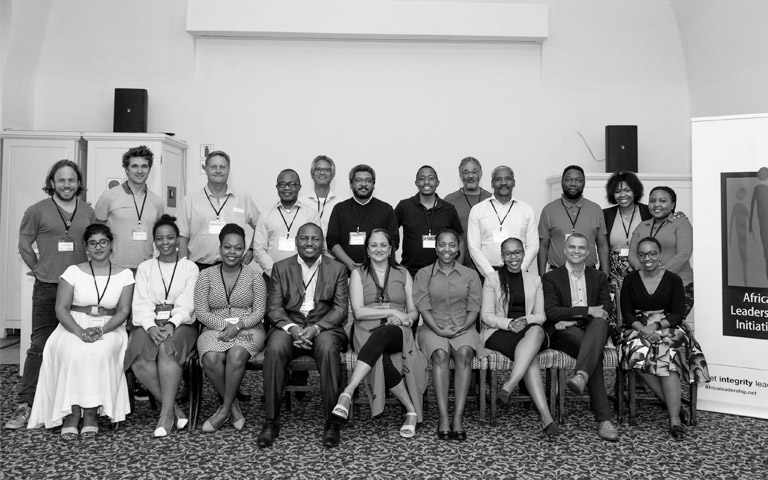 We’re living in interesting times. As much as the reformist agenda of President Cyril Ramaphosa is pushing back the forces of state capture, those forces in turn are fighting back against reforms that will cut off their access to power and riches. At November’s Dialogue in Johannesburg, ALI Fellow Ferial Haffajee explored the headlines.

Is the fightback on the back foot? What are the implications of the US sanctions imposed on the Guptas? How is the NPA doing? And what is the role of Public Protector in all this?

In her powerful yet pragmatic opener to the Dialogue, Ferial – who is currently writing a book with the working title “The Fightback” – explored these and other issues in the headlines.

Ferial started her talk with a reference to a familiar Aspen reading: Ursula le Guin’s “The Ones Who Walk Away from Omelas”. Let’s look for a moment, she said, at the ones who walked away – because there have been many of those, and we need to remember that people and groups who were not willing to compromise were active throughout the apparently most hopeless times of the Zuma era.

Civil society – the Helen Suzman Foundation, the Ahmed Kathrada Foundation, Freedom Under Law, Save SA and others… they all “walked away from Omelas”, Ferial said. The progressives parts of the business community did too, pushing back hard against the kleptocratic nightmare of the 2009 -2017/8 era. So did the investigative media. Four whistleblowers at Transnet, SAA, Trillion and Eskom – Suzanne Daniels, Bianca Goodson, Mosilo Mothepu and Cynthia Stimpel – were pivotal to lifting the lid on what we now know to be theft of around R100 billion. Within the ANC itself there were those who led from the middle in very trying circumstances – ANC loyalists who had a vision larger than themselves; and who stoked rebellion in NEC after NEC until they wound down the defences of the corrupt. “We need to keep this foregrounded,” Ferial said, “to stop us slipping into hopelessness and pessimism regarding where we find ourselves now.”

Ferial was at pains to acknowledge that where we find ourselves now, is in a better place. Had Ramaphosa not won the party’s vote, South Africa would, she argued, have already been downgraded even by Moody’s; the Zuma faction would still be ascendency; and South Africa overall would have been well on its way down. Other wins and cleanouts to which Ferial referred include:

Still, Ramaphosa’s winning margin was small; his revolution is thus tentative. And among the barrage of assaults he is facing is the matter of his very expensive campaign, which we now know to have cost around R500 million. Was it worth it? Given the alternative, Ferial argued, yes; and in later discussion a Fellow pointed out the naivete of expecting political campaigns to be fought without that kind of funding – but that does not take the ammunition out of the guns pointing at his presidency.

On the other hand, Ramaphosa’s personal popularity is much higher than that of his party: polls put him at 10% or more ahead of the ANC as a whole. Comparing him to reformers who are included in the Aspen reading agenda – Paul Kagame, Mikael Gorbachev, Lech Walesa, Nelson Mandela – Ferial asked whether Ramaphosa could move faster? Could he leverage his personal popularity to be more brave – or is he moving as fast as he can, given the tenuous hold he has? “And what people like us do to help him move a little faster?”

To explore that, Ferial turned the group’s attention to the anatomy of the fightback.

Most of it is happening within the ANC, out of the office of the secretary general, Ace Magashula, who has strong support from the contingency of state capture beneficiaries in Luthuli House. Since Magashula caused mayhem in the markets through his misreading of the NEC’s discussion about Reserve Bank independence, there has been illusion about how tenuous the balance of power is in the ANC.

Former spy boss Arthur Fraser still retains significant powerful in the intelligence community; and his former agency, the State Security Agency, continues to wield influence despite evidence that it is profoundly compromised. There have been suggestions, in fact, that effectively it continues to operate as former President Zuma’s personal force. For instance, Ferial revealed, it now seems likely that Public Protector, Busisiwe Mkhwebane, whose office is the epicenter of the fightback, was “deployed” out of that unit.

Ferial also drew attention to the twinning of campaigns by the Public Protector and the EFF – certainly against Public Enterprises Minister Pravin Gordhan, but also against SARS head Ed Kieswetter and, increasingly, against independent power producers (IPPs) in the renewable energy space. “IPPs are the next big thing,” said Ferial.

And why is Julius Malema doing this? “You can see a clear alliance between Julius and the fightback individuals in the ANC. I think it’s Julius’ way back into the ANC and into the presidency,” said Ferial. “EFF members are starting to get worried about its prospects. Julius does want to be president in the next 10 years.

“Like Ace, he functions well in patronage networks – they know how to run them – and they do well in populist, big-man cultures.”

In the face of that alarming thought, Ferial did acknowledge significant countervailing forces. “The Zondo Commission. It’s going to be extended, and that’s a good thing, as it keeps the pressure on. There’s reform itself – people are beginning to feel and benefit from its impact. Civil society has seen a resurgence. The turning off of the taps in the provinces has been important to neuturalising patronage. The parliamentary inquiry into the fitness of the Public Protector to hold office is important. And it’s good that KwaZulu Natal is now largely on-side with Cyril Ramaphosa.”

What’s missing – and what would make all the difference – is seeing some growth in the economy. But the mid-term National General Council between elective conferences is coming up in June 2020 amid rumbling that President Ramaphosa will face a vote of no-confidence, so “from now until then, we are going to have a distracted presidency, and that’s not a good thing,” Ferial said.

She concluded with a question: As we see the ferocity of the fight back, what’s our role? To worry about it, or to do something?